The Burlington Shebang by Jessa Agilo 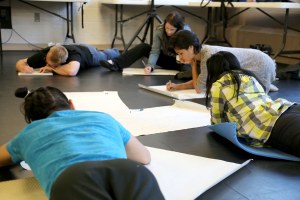 As expressed by some of the Burlington Shebang artists (“because witnessing isn’t enough”), the open, collaborative value of art has “the chance to create beyond one’s own limitations, to infuse new perspectives and expand interpretation of possibility(ies)”, to “open the mind and soul to allow us to connect more deeply and experience life in a more fulfilling manner”, to “reveal our insides”, and, perhaps more simply, “to achieve an unknown and maybe unexpected outcome”. 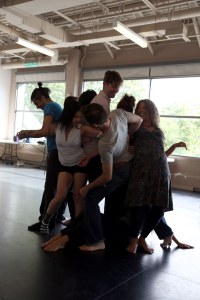 Artists, audiences, presenters, producers and community members so rarely have the opportunity to come together in the inspiring, essential environment of the studio. By observing this latest phase of The Burlington Shebang Process (in August 2015), it is clear to me how so much can happen when artists and their supporters are granted time to communicate their stories together, and to balance between “knowing and not knowing” in an unscripted exploration of life, art and the creative process without restriction, expectation, or judgment.

Many of these desires came to light through the course of a delightful and deeply felt day at the Burlington Performing Arts Centre.  Reflecting the Burlington artists’ expressed desires to share their individual and collective senses of “play”, “abandon”, “sorrow’, “love”, “fight”, and a “visceral connection to our shared humanity, from heartache to high hopes”, a highlight of the day was an unexpected, unscheduled visit by Costin Manu, Burlington Performing Arts Centre’s Community Engagement Manager.

After brief introductions, the group was engaged by the telling of a profound story shared by Costin. Completely unplanned, the stories shared between the group inspired a new creation process including Costin and the artists.  Culminating in a short dance-story performance, the dance brought together many of the sharing techniques that Shebang artists have been developing in Burlington and other communities. Tears of heartache and hope were shared amongst all in attendance.